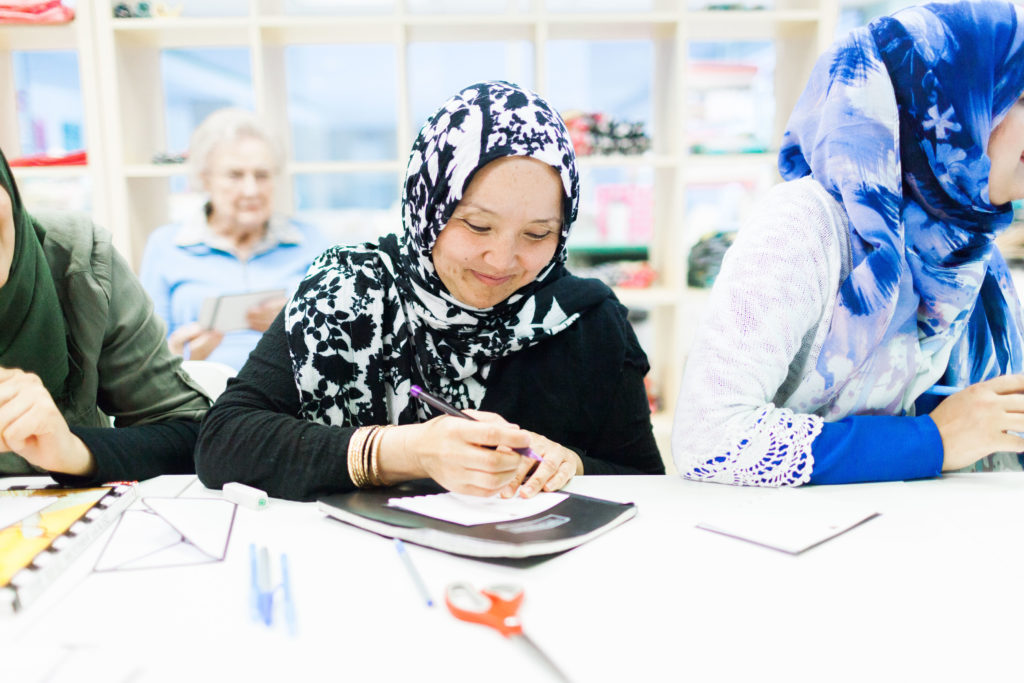 When Mariam came from war-torn Afghanistan to the U.S. in 2015, she didn’t speak a word of English. Life was difficult and she felt isolated. “I didn’t know anything,” she says.

She was separated from her husband for three years, and when she arrived with her young son, it was the first time he met his father. Mariam couldn’t go anywhere, but desired more independence. She signed up for English and computer classes at the Northwest Community Center in Dallas, and she slowly built up her skills.

One day in English class, her teacher handed her an application for Vickery Trading Company, conveniently located upstairs in the community center that sits in the heart of the refugee community in Dallas.

Vickery Trading Company pays women refugees a living wage for sewing children’s clothing while providing education and mentor opportunities. When women arrive in the United States, their husbands are often placed in jobs with long hours, leaving their wives alone and at home while children are at school.

“The ultimate goal is to empower women to be able to get up on their feet and fast track that assimilation process,” says Giddens. “We give them a skill so they can earn income and become taxpaying contributors to society.”

Mariam did some light sewing in Afghanistan, but at work she began learning how to operate all the sewing machinery and make clothing.

Many refugees come from ethnically homogenous communities, and part of Vickery’s model is to foster cultural exchange at the work place. When Stephanie Giddens founded Vickery Trading Company, she was told that Iraqi women and Afghan women could never work together.

But at Vickery, women from Iraq, Afghanistan and Congo all work alongside each other. Besides learning about another culture, the women are forced to speak English, an essential skill for success in America.

“We learn their culture and speak English to each other. I am happy to do this,” Mariam says.

Vickery is not meant to be a permanent position. At the end of the 18-month program, they work with garment companies and manufacturers in the Dallas area to place the women in more sustainable sewing positions. Along the way, they give the refugees the technical and soft skills they need to fins a job.

Mariam’s husband is a case manager for the International Rescue Committee in Dallas, where he helps settle other refugee families, and between his career and the income Mariam earns at Vickery, they bought a house this year.

Mariam and her husband have one son who hopes to be a police officer, and Mariam’s goal is open her own dress shop one day. Not only does she contribute to her family’s wellbeing here in the states, she also sends money to her family back in Afghanistan.

“Now we solve our own problems,” Mariam says.

The Women of Welcome Team